The award celebrates faculty and staff for their extraordinary contributions in connecting the university with the broader community on issues of critical social impact.

Jesse A. Miller, Jr., Director of Laboratory Facilities for the Department of Chemistry, was named a recipient of the 2013-14 Campus Award for Excellence in Public Engagement. The award is administered by the Office of the Chancellor and honors extraordinary contributions of faculty, staff, students, and projects to connect the university with the broader community on issues of critical social impact.

He is a driving force behind R.E.A.C.T. (Reaching and Educating America's Chemists of Tomorrow), the largest outreach program of its kind at the University of Illinois. Undergraduate students deliver a variety of programs to different communities in East Central illinois. He has also been known to provide chemistry demonstrations for local television stations to air.

Eleven faculty members, four academic professionals and five graduate teaching assistants at the University of Illinois were honored Tuesday (April 22, 2014) for excellence in teaching and advising. The group was recognized during a reception at the Alice Campbell Alumni Center. Don DeCoste was one of this elite group. Soon after he received a Provost's Excellence in Undergraduate Teaching Award.

Donald DeCoste, a specialist in education in the Department of Chemistry, has the ability "to capture the imagination of young people and to make his courses truly memorable". His goals in teaching are that students should "understand the materials at a conceptual level and understand the nature of science". His highest compliment from a student: "I am trying to teach myself how to ask the same questions you do in a lecture, so that I don’t need you anymore." (University of Illinois News Bureau article)

Criteria for the award includes demonstrated excellence overall, a supportive and service-driven attitude, and an eye towards improvement of oneself, ones' employees, and the department and college on the whole. 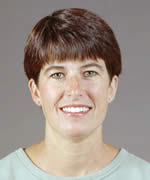 Beth is coordinator for the inorganic, materials and physical (IMP) chemistry office and is crucial to the graduate student recruiting process. Beth's nominators write of her excellent managerial and people skills as well as her foresightedness. One nominee stated, "Beth Myler is worth her weight in platinum to our Department". Another wrote, "Beth’s excellence in all aspects of her job, her ability to improve morale not only of other staff but also of students and faculty, her efforts at improving the performance of her office and her supervisees, her creative approach to improved efficiencies, and her projection of the professionalism of her office and the Department of Chemistry are simply unsurpassed".