The following alumni have provided commentary and/or reminiscences on their experiences in the School of Chemical Sciences.

On the morning of Friday, December 6, 1957, a small group of Physical Chemistry TA's huddled around a radio in the basement of Noyes Lab. It was time to prove to the world that the US could do as well as the Soviets. It was time for the US to launch its first satellite. The rocket rose 4 ft, lost thrust, exploded and destroyed the Vanguard TV3. What a major disappointment to the graduate students listening in, and to all of the United States.

Starting at University of Illinois in 1956, I remember deciding to major in chemistry based on the interest I had in high school in the discipline and also in physics. However, I did not then like mathematics and had only taken two years of high school math. I enrolled in Math 111 taught by a Japanese graduate student. In his class, I underwent a transition in attitude, found math as exciting and interesting as chemistry and physics, and resolved to continue pursuing a degree in chemistry.

Chemistry 102 was taught in the fall of 1956 by L.A. Hiller, Jr. He taught theoretical studies of gas phase biomolecular reactions. Later Hiller became renown for work on composing music using a computer. The Department of music has erected tributes to his memory.

Chemistry 106, Spring 1957, was taught by R.S. Drago, also an icon in inorganic chemistry. I have fond memories of that class that included topical areas from electrochemistry, solution chemistry, and nuclear chemistry.

A few years later, a team of faculty taught the advanced inorganic chemistry course Chemistry 315. Theodore Brown was the principle instructor and R.S. Drago was one of the other instructors. I encountered Drago again while a graduate student in theoretical chemistry at Northwestern University. Drago delivered a Saturday morning colloquium before the NU Inorganic chemistry contingent. Noting that bitter feelings existed between Drago and certain Northwestern faculty, I did not identify myself as one of his former Chem 106 students. I never did determine the scientific nature of the controversy.

In the spring of 1956, a faculty member published an article in the Daily Illini advocating that men and women on campus live together before marriage. There was an uproar throughout the state of Illinois over that proposal so common in present times. President David Dodds Henry had the tenured faculty member dismissed to appease the puritanical outrage. That dismissed faculty member was blackballed from further stateside employment and had to find academic employment in Mexico. Come graduation in June 1961, I felt upset having to receive a facsimile of a diploma from President Henry.

Fall 1957, I took Chemistry 111 (qualitative analysis) taught by L.A. Hiller. Spring 1958, I suffered burnout and withdrew mid semester. I resumed studies in the fall at the Navy Pier Branch (now UI-Chicago), and remained there for three semesters before returning to Urbana. In that period I completed the basic calculus sequence and gained my first exposure to a lifelong area of math interest: differential equations (Math 341). I also took a three semester physics sequence. Physical chemistry (Chemistry 342) excited me. Burnout was no longer a problem and I returned to Urbana refreshed.

At Urbana, I continued further studies in physical chemistry, taking such classes as Chemistry 344, 346 (macromolecules),
radiochemistry lecture and lab, and advanced physical chemistry 348 and 349. A fine, dedicated group of faculty taught those courses: T.S. Piper, R. L. Belford, and John Hummel. In radiochemistry, I was exposed to the notion of alpha particle decay through quantum mechanical tunneling, but also to beta decay. Then, before the notions of electroweak nuclear decay and strong nuclear interactions were systematized, I wondered why separate constructs were needed to treat these processes. I felt too embarrassed to bring this issue then perplexing to me before Professor Hummel.

Concurrently studying radiochemistry and undergraduate nuclear physics, I had as one classmate the grader and lab assistant in the radiochemistry classes. In the nuclear physics class, I remember the late Professor Kruger insisting the engine of cosmic rays never would be discovered. That remark proved incorrect as current work in astrophysics has identified compact objects like neutron stars and black holes as likely engines generating cosmic rays.

Continuing with math courses, I remember well the late Professor John Bartle who taught the second differential equation class Math 342. He noted being "raised" on Courant and Hilbert's mathematical text on differential equations. Bartle prided himself on indifference to the Schroedinger wave equation so important in the quantum realm. Ray Langebartle's Math 398 Laplace Transform course was so exciting and assisted me later in graduate school work and later in industrial mathematical modeling.

Unfortunately, few women were on the University of Illinois faculty in either chemistry or physics. I remember well Virginia Bartow for her dedicated instruction on accessing the chemical literature and on the history of chemistry. Notes from her course proved valuable years later when I did postdoctoral work in Germany and used those notes to identify European science historical sites.

Without question, the late Samuel Schrage, McGill University graduate school classmate of Rudolph Marcus, was the finest teacher known to me in any university setting. His Navy Pier physical chemistry (342) class (1958 or 1959) inspired me to focus on the theoretical aspects of chemical science. This gave me initial exposure to classical thermodynamics, kinetic theory, quantum and statistical mechanics: subject areas that continue to interest me. In In later years, when he directed University of Illinois, Chicago LAS University Honors (James Scholar) Program. I looked him up and had several very stimulating conversations with him on the role of the University in Society. I was quite aware, dating back to experiences in his classroom, how important he considered linking instruction on the then two campuses of University of Illinois. I always sensed his dedication to teaching but also recall one of the UIC students noting to me how valuable she found his McGill University research on membranes in her own undergraduate project.

After Sam Schrage passed away, a series of Schrage Memorial Lectures were held at University of Illinois, Chicago. Rudolph Marcus delivered one in 1995. Unfortunately funding issues prevented their continuation. I do remember the first Schrage Memorial Lecture, where the late Northwestern University biophysical chemist, Irving Klotz, was the principle speaker. At that lecture I delivered introductory remarks as a representative of his students. I considered it a great privilege to speak in memory of a person whose life work so honored the University of Illinois.

At Navy Pier and UIUC, I remember first, a classmate, Peter Bertoncini who like myself later obtained a PhD in theoretical chemistry. At Argonne, he went on to make seminal contributions to controlled nuclear fusion a most promising venue for solving the global energy crisis.

The classmate with whom I have kept in touch is chemical engineer George Nassos, now emeritus at Illinois Institute of Technology School of Business. He has pioneered extensively in integrating sustainability within profitable business practices and is one of the strongest advocates for conversion to renewable energy known to me.

A memorable classmate was Byron Drachman, an engineering student who later became a math faculty member at Michigan State University. He did calculations for theorist Martin Karplus, then a faculty member with the Department Chemistry and much later a Nobel Prize recipient. Byron noted to me feedback from Karplus that most of his colleagues in the department did not consider theoretical work a viable part of chemical science. Thankfully, in later years, faculty like Rudolph Marcus, David Chandler, Peter Wolynes, Nancy Makri, Sharon Hammes-Schiffer enabled University of Illinois to erase that mistake and become distinguished in theoretical chemistry.

I took freshman chemistry (what was then Chem 107 & 108) from Prof. Willis Flygare. All his courses, whether freshman chemistry or graduate seminar were taught at 8:00 am. He was clearly a morning person! He was well-known as a brilliant physical chemist, and it showed in his teaching. He was very interested in the book chapters dealing with physical chemistry, but not so much in the descriptive chemistry. In fact, at one lecture he opened by saying (as I remember), "Today we're supposed to cover Chapter 32. Well, you can read it as well as I can read it to you, so let's move one to the next chapter!"

As a senior, I took some graduate inorganic courses. One of them was physical inorganic chemistry with Prof. Hendrickson. One evening, I was working on a group theory problem sitting at my desk in the Haight/Bailar lab on the first floor of Noyes Lab and came to a stumper. I wandered up to the third floor and tracked down some of my fellow students. We had all hit the same brick wall, so we went to the TA's office and asked, "Does this problem require us to solve the determinant of a 24x24 matrix?" He looked at it and agreed. So we all trooped to Prof. Hendrickson's office, and he happened to be in. He looked at the problem, agreed and said, "Assume this, this and this are zero." We all dashed back to our respective offices and started working. A few minutes later, we reconvened. It had been knocked down to a 10x10, but that was still beyond our capabilities in those pre-PC days. So, back to the TA we went, then to the professor, who pointed out a couple more values that we could assume were zero. A quick inspection revealed that it was now a 3x3 matrix. THAT we could do! I loved the camaraderie on display of my fellow students in that late night problem solving session!

Professor having an impact on my life.

My mentor as an undergraduate was Professor Gilbert Haight. I did research for him starting in the summer after my freshman year. He let me write up the work, and it became my first (and only!) published chemistry paper. He was a brilliant man and a great friend.

I called the Chemistry department home for many years and would like to acknowledge the hard work of the General Chemistry instructors and professors to make that experience top notch!

Professor Yi Lu was a fantastic mentor and positive influence. He always encouraged me to pursue and share my academic endeavors. I have him to thank for continuing to propel myself in my graduate studies.

Illinois has been a defining moment in my life. My stay in Illinois was the best time of my life. The Lu lab has been an instrumental part of my training as a researcher. I had the chance to work with some of the most brilliant researchers whom I can say are part of a close family. It was also here that I had the liberty to work independently even as an undergraduate to think big about how to solve good problems in science and chemistry. Thank you Illinois. Its been a good run.

Over the course of 3 years, Prof. Lu gave me the freedom and space I needed to grow and think critically about what it is that matters and what are crucial experiments to prove my hypothesis. He has always been strict and pushes me to be better than I am. One advice I will always remember given by him was: "Don’t think about what graduate school or what PhD to work in. Think of a problem you want to solve 20-30 or even 50 years from now. Think of how your PhD and postdoctoral studies can give you the skills you need to solve those problems. PhD is just a part of a phase to equip yourself for the problems to solve in your lifetime." It is with this mindset I will approach my work in science now and in the future. 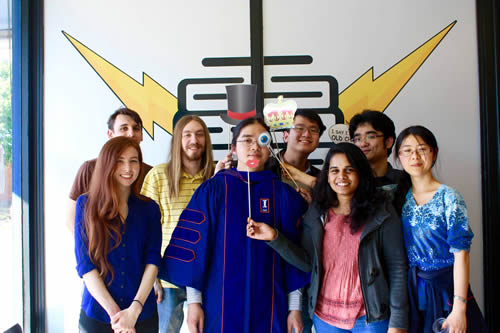