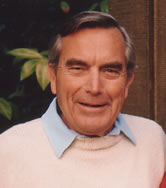 Internationally acclaimed for his skill in organic synthesis, his work answered questions of fundamental importance to biochemistry and life processes. He invented fluorescent probes and dimensional probes of enzyme-coenzyme binding sites and DNA double-helical cross sections.

At the time of his retirement in 1986, Professor Leonard had been at the University of Illinois for 44 years, directed 120 graduate students, and published over 400 papers. Professor Leonard was a Faculty Associate in Chemistry at the California Institute of Technology. Nelson Jordan Leonard died on October 9, 2006 at the age of 90.

The Nelson J. Leonard Distinguished Lectureship Fund was created in Professor Leonard's honor at the time of his retirement in 1986 through contributions from colleagues, students, and friends, including the late Mrs. Louise Leonard, Eli Lilly and Company, Monsanto Company, and Organic Syntheses, Inc.