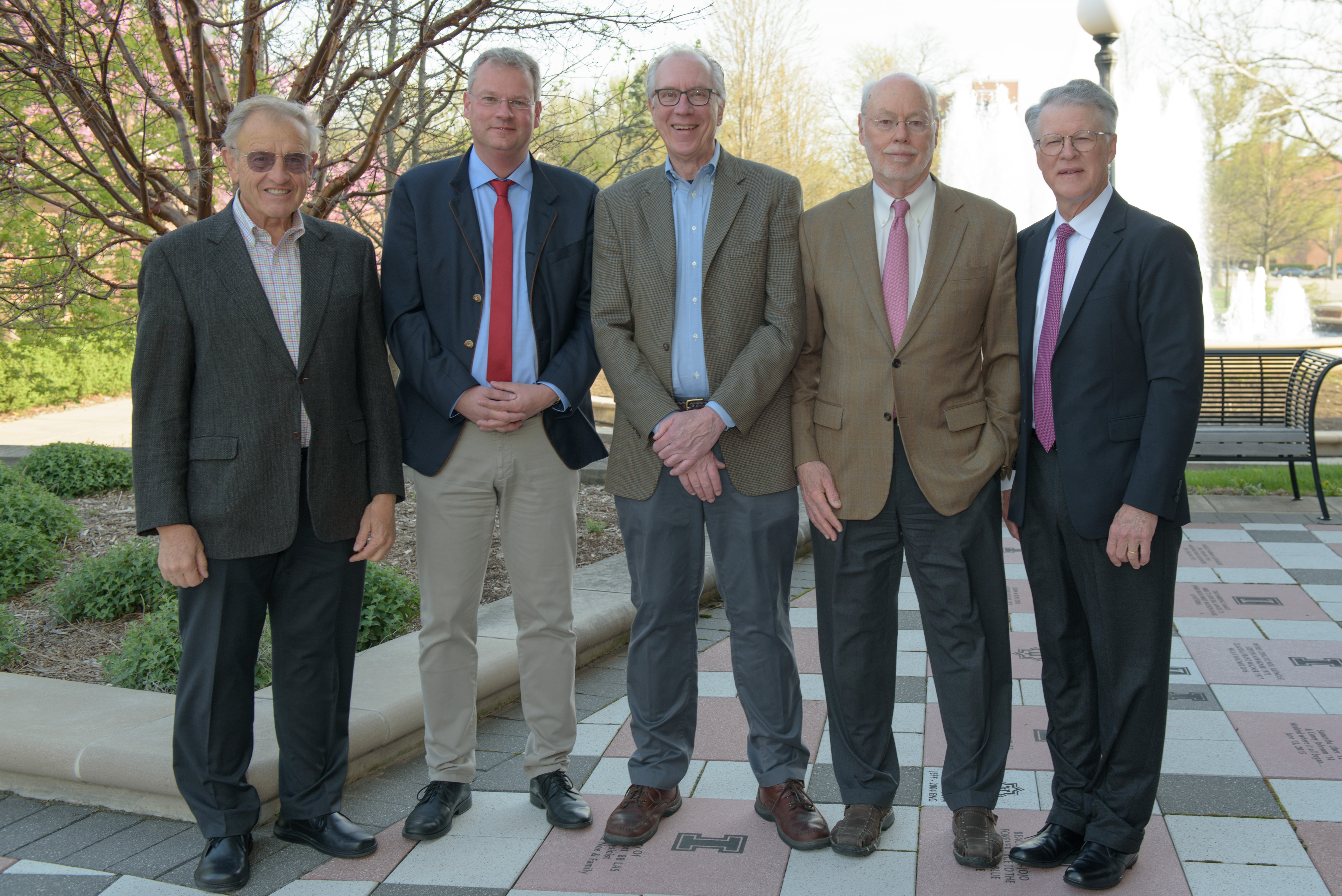 On Saturday, April 15, 2017, the School of Chemical Sciences hosted a special event to celebrate the life and legacy of one of our most influential and most universally admired colleagues, Professor Nelson J. Leonard. Nelson Leonard spent his entire career at Illinois, starting in 1943 as a postdoctoral research associate with Roger Adams, and staying on the faculty through his retirement in 1986 as the Reynold C. Fuson Professor of Chemistry. Professor Leonard’s life and scientific contributions have been thoroughly chronicled in many places, perhaps most notably as a member of the National Academy of Sciences and as a member of the College of Liberal Arts and Sciences Gallery of Excellence , celebrating 100 years of LAS.

Upon his retirement in 1986 a fund was created by his wife, Louise (Nel) — together with contributions from former students, coworkers and friends, as well as Eli Lilly, where Nelson had a long-standing consulting relationship — to establish the Nelson J. Leonard Lectureship in the School of Chemical Sciences. This lectureship was intended to reflect Nelson’s pioneering efforts to cross disciplinary boundaries and thus bring together campus chemists, biochemists and chemical engineers of internationally acclaimed status (often the previous year’s Nobel Prize winner) working at the interface of chemical and biological sciences. A special installment of this prestigious lecture series took place in 1997 to celebrate Nelson’s 80th birthday (September 1, 1996). This gala event brought four notable scientists and friends of Nelson to our campus for a full day scientific event and a banquet in the evening. Many former coworkers and friends from around the globe attended the event along with members of Nelson’s family.

Nelson passed away in Pasadena, CA, just after his 90th birthday and a Memorial Celebration was held on campus in May of 2007 that featured wonderful testimonials from notables such as E. J. Corey (Nobel Prize 1990) and Stanley Ikenberry (past President of the University of Illinois), as well as many colleagues, friends and family.

The centennial of Nelson’s birth (September 1, 2016) could not go without another special event to serve as a pleasant reminder to his colleagues, an important familiarization to the younger generation and also as a milestone in the evolution of the field of chemical biology for which Nelson was an influential architect. In particular the chemical biology of the nucleic acids has been revolutionized since the early days of Nelson’s studies. Accordingly, the theme of the centennial was chosen to reflect the most recent and important advances in the chemistry and biology of the nucleic acids and as an homage to his groundbreaking early studies. The speakers who graciously agreed to participate in this event represent the absolute pinnacle of scientific stature, accomplishment and impact. Professors Thomas Carell (LMU Munich), Tom Cech (University of Colorado, Nobel Prize 1989), Marvin Caruthers (University of Colorado), Peter Dervan (Caltech) and Phillip Sharp (MIT, Nobel Prize 1993) are among the world’s most imaginative and productive researchers and all have been influenced by Nelson, both professionally and personally.

The stature of these speakers drew enormous response from the entire University of Illinois community beyond the School of Chemical Sciences. The Alice Campbell rooms were at capacity all day Saturday and the participants enjoyed the brilliant lectures as well as individual conversations with the speakers during breaks and lunch. We were also delighted that two of Nelson's children, Marcia and James Leonard, could join us for this most memorable celebration of their father, our dear colleague and a friend to the entire chemical community.