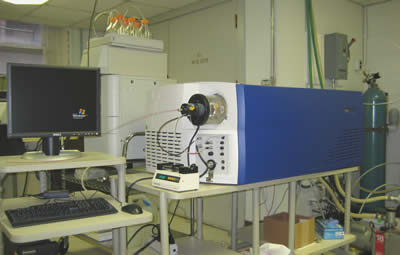 The Quattro Ultima is a quadrupole-hexapole-quadrupole (QHQ) mass spectrometer with a mass-to-charge range of 4,000 Da, with unit resolution across the entire mass range. Data acquisition and processing is controlled by the Waters MassLynx data system. The Ultima is equipped with an electrospray (ESI) ion source.

The Quattro Ultima can be configured with any of the following three options:

Ionization takes place in the source at atmospheric pressure. These ions are sampled through a series of orifices into the first quadrupole where they are filtered according to their mass to charge ratio (m/z). The mass separated ions then pass into the hexapole collision cell where they either undergo collision induced decomposition (CID) or pass unhindered to the second quadrupole. The fragment ions are then mass analyzed by the second quadrupole. Finally the transmitted ions are detected by a conversion dynode, phosphor and photomultiplier detection system. The output signal is amplified, digitised and presented to the data system.

The Ultima is one of two available walk-up instruments for LR ESI. A second Ultima is used by MSL staff to run LR LC-MS primarily for quantitation via MRM.

The Quattro Ultima is available for self-use by graduate students and post-docs. If you wish to be trained, please contact Furong Sun.